During 2021 it became apparent early on in the year that we had some issues with a large group of disengaged boys for a variety of reasons.  As a Principal and Senior Leadership team we struggled to know what to do to meaningfully reengage these young men back into education. A plan was developed after special funding was received from the Ministry of Education under the Urgent Response Funding.  This allowed us to trial a new project - a "Boys Class".  Single sex classes are not a new concept but after trialing the "Whanau Hub" the previous year we realised that a class with boys alone would certainly be worth a try.

The concept behind the boys class is that we had to think differently to provide a new solution to the ones we already had tried to reengage these young men.  Boys learning as boys in a safe space where they are challenged to be the best they can be is the underlying idea.  The concept behind the class is also See More, Do More, Be More!  The team of people who worked alongside the boys when we started this project in Term 3 was Joss Hale (Principal), Danielle Karauna and Murray Robson.  Later in the term we had Mirissa Napia joined us when Kobe Boreham joined our class too.  Kobe has learning differences and this was great for our boys to learn empathy and humility.  As the Principal I decided I would like to be part of the intervention with these young men rather than part of the punishment which is what would have happened if we did not create this class.  Prior to this class beginning some of the boys were on such reduced timetables they were only attending for the morning.

The boys in the class range from Year 9 to Year 13.  The Year 9 and 10 students in the class who are the majority are in the room spend all day in the boys class, similar to a Homeroom.  The students in Years 11 to 13 were in the boys class for varying amounts of time and their mainstream or trades programmes for the remainder of the time.  The boys all had individual programmes of learning with the expectation that all students achieve the goals set.  All year 10 boys who were in the programme since the start have now gained NCEA Level 1 with all other seniors gaining the level of NCEA they were working towards.

Throughout the two terms we studied about landmarks of New Zealand with the idea of learning more about our beautiful country.  We wanted to expand the boys knowledge of travelling and New Zealand and had planned a trip to Northland but due to Covid we had to change our plans and visit local sites.  We also wanted to make a connected community of young men who could be challenged on their beliefs and learn together.  We went on a number of trips to reinforce the idea of challenging the boys to push past any fears they may have and also to work together - these included zip lining, luging, quad biking, etc. We had the expectation that all boys took part in a sporting activity this year which they all did, mostly rugby and basketball. The achievement, attendance and connection to school has improved for all of these young men.  The boys in the class make up 7% of our school population so it has certainly been worth reengaging these young men.

2022 sees the class continue with some changes in staffing and some new learning plans.  We are proud of the success of these young men and thankful to those who have helped along the way.

Here is a link to the presentation from the Celebration dinner

Here is a link to the certificates showing the students achievement 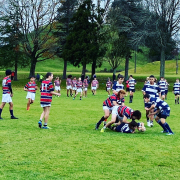